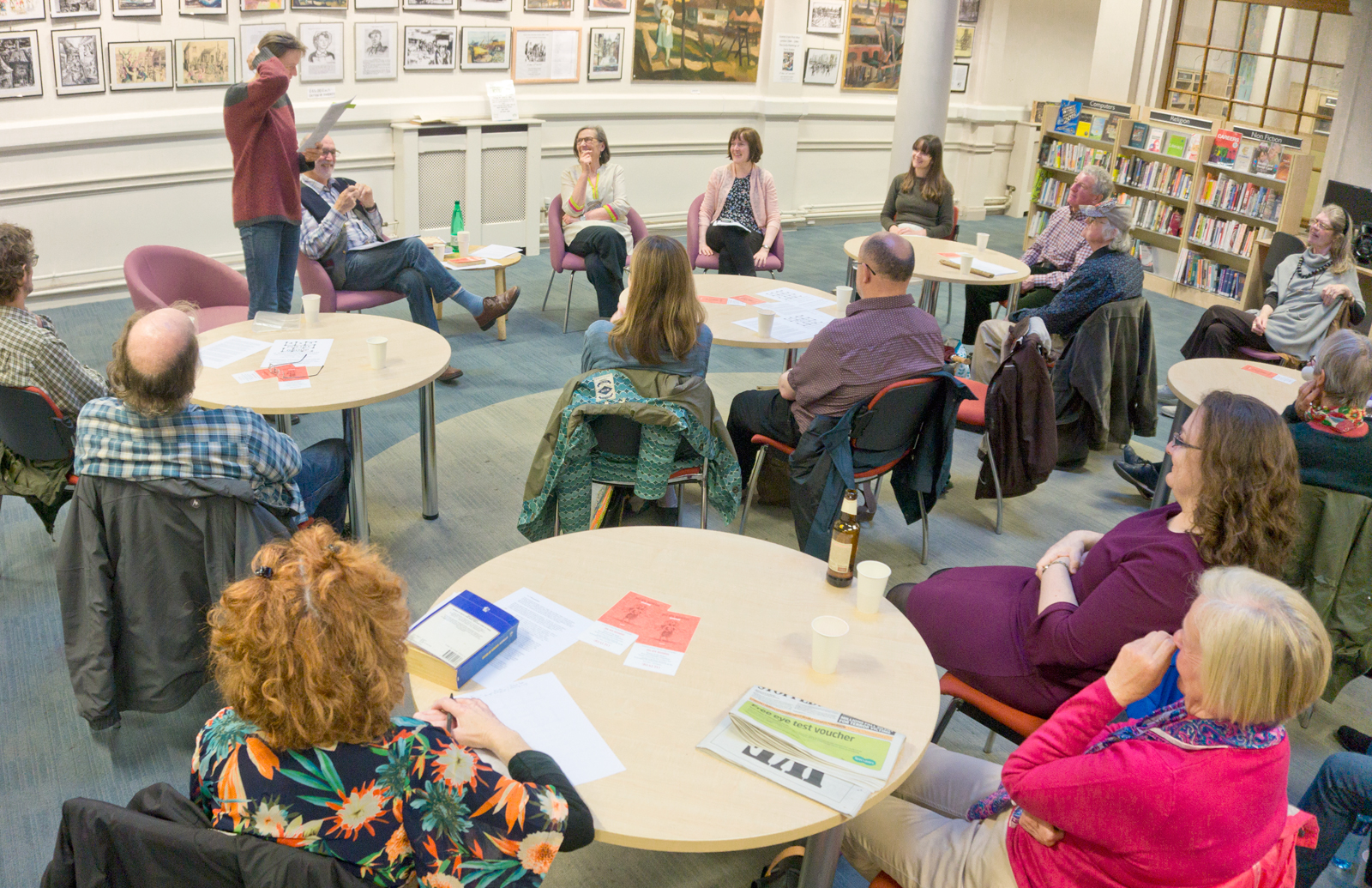 We were treated by Mick Delap, Fiona Moore (reading in the photograph), Jazzman John Clarke, Lorraine Mariner, Sarah Westcott and NJ Hynes to serious and satirical works – their own and by other poets and writers from all over the world and eras (Amichai, Frost, Hardy, Angelou…). Two poems by Kate Foley and one by Carl Griffin were read by Mick. There were contributions through open mic, including extracts from the diary of suffragette Marion Wallace Dunlop, who went on hunger strike and refused force-feeding, and was eventually released; we heard how Plato predicted that we would eventually be ruled by bullies and many other thought-/laughter-/tears-provoking pieces of writing.

‘Proper’ summer is finally here and, while I’m reluctant to start thinking about autumn, I am inevitably and joyfully beginning to plan the first event of the ‘new term’. The first thing I did was to look back at all the in-words events from the very first one in January 2017, and I realised that over five years I hosted 49 readings, including a number of lectures by Graham Fawcett. 49! What shall I do for the 50th? I’m thinking that, although it would limit the numbers in the audience, I would really love to have an in-person event at the West Greenwich Library, like ‘in the old days’. And you never know, I may even be able to get to grips with ‘hybrid’…. Of course, it will depend of many factors, and as soon as I can, I shall post a date if not a full programme.

I love the new animation at the top of my homepage. Thanks to Paul Kley for creating it. The words on the flying page are not a quotation but a whole poem, a favourite of mine, by the Italian hermetic poet Giuseppe Ungaretti. It is impossible to translate, though countless attempts have been made. I am sure you can guess its meaning and I leave you to create your own ‘translation’ of it. Ungaretti fought in the trenches and those two lines represent a moment one morning – pared down to a sense of the absolute, maybe also of possibilities?

As we emerge from a not-yet-over pandemic and wake up every morning feeling the dread of conflict but also aware of the beauty of spring and the blessing of nature and community, Ungaretti’s words are more than ever appropriate.

I am taking a break from organising things over the summer. Whether I will be as dynamic as the train above, or I’ll take time on a siding, I’m not yet sure.

Either way, I am always happy to hear from you with thoughts and ideas, and wish to thank you for your support so far.